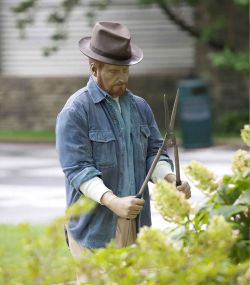 The Simsbury Chamber of Commerce is investing in a series of 23 bronze statues to be placed around town next year, as part of a push to increase tourism and foot-traffic for the small western Connecticut town during the spring and summer.

The statues, sculpted by renowned artist Seward Johnson, depict life-like human figures performing everyday activities, like a girl eating an ice cream cone and a man reading a newspaper on a park bench.

“Our biggest reason for doing this is to bring more visitors into town, to not only see these statues, but to frequent the businesses as well,” explained Lisa Gray, executive director of the Simsbury Chamber. “We envision having these statues placed around town and close to our local businesses, so people who are walking and biking can stop in later for a dinner or a beer.”

To pay for the walkable art display, the chamber held a kickoff party and fundraiser in late November at Simsbury Bank, its largest sponsor and the first business to contribute to the drive. The chamber is offering sponsorship levels ranging from $150 to $10,000.

“We’re reaching out to our local businesses to help them see that this will bring more people into town, which equals more business for them,” said Gray. “We’re also reaching out to residents, because there are a lot of people who are interested in art or getting outside during the spring and summer months.”

The idea was inspired by the chamber’s previous executive director, Ferg Jansen, who saw some of Johnson’s works on display while visiting family in Indiana. The reaction from stakeholders and the community has been largely positive so far, said Gray.

“Everybody loves the first piece that we call our teaser piece,” she said. “It’s called ‘Special Delivery,’ and it’s a statue of a mailman we have positioned out in front of a local grocery store. We’ve gotten loads of great emails and comments about it, and it’s been shared all over social media.”

The selection of sculptures will include Johnson’s renditions of famous American works, like “V-J Day in Times Square,” the iconic photograph that captured a sailor kissing a nurse at the end of World War Two, as well as “American Gothic,” the classic painting of a solemn-faced, colonial-era couple.

All told, the statues will be on display for four months, from May–September 2018.

“Our community is about 10 miles outside of Hartford, and we have some local attractions, but not a ton that will bring people from other parts of the state,” explained Gray. “This will help us sustain our businesses through the slow summertime and get more feet on the street visiting our shops and restaurants.”

Want to be featured in the #ACCESpotlight? Share your story with Ben Goldstein.

Send this page to a friend
Read More